Know Your Rights: “What About My Miranda Rights?” 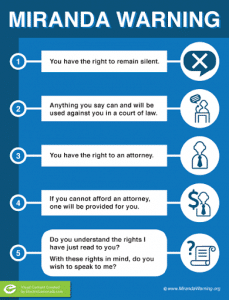 The police did not read my rights at the scene! Can they dismiss the case?!

The answer is a confusing “yes and no”. The Miranda warnings are somewhat popular due to inclusion in many television police dramas. What many may not know is that there is no specific language for the warnings. However, the warnings must, using whatever language convey 4 basic warnings:

Miranda Warnings can be confusing

Another myth popularized by some police dramas is that the law requires the warnings for simple information gathering. This is simply not true. The law only requires reading the warnings during “custody” or “interrogation” of a person (typically called “custodial interrogation”). In some situations, this may mean after the police place someone under arrest. However, an “arrest” is not a “custodial interrogation” unless the officer starts to ask specific questions. If the officer is only talking while transporting someone to the jail, they are not “interrogated”. Only if the officer is asking questions specifically designed to gather information about the crime is it an “interrogation” to trigger the rights.

As another confusing point, a person must EXPRESSLY invoke these rights. That means if they want to invoke the right to remain silent, they must specifically say “I am going to remain silent” to the officer. In some cases, simply remaining silent can be enough. But, courts state that simply remaining silent is “ambiguous” and sometimes allow admission of statements made before invoking or waiving the right.

There are many other specific examples of what we will call “loopholes” for the rights. Exploring every single aspect of the Miranda rights would take far too long for a casual reader (and in fact the Constitutional Rights associated with these warnings are the main subject of a semester-long Criminal Procedure course for law students)! One exception to know is that the warnings DO NOT APPLY to probation revocation proceedings because the evidence is not used to give extra punishment. Even if the rights did apply, in many cases the conditions of probation will specifically state that a person may not refuse ANY lawful request by police. This means that if the officer (lawfully) asks for a blood draw, the person must do it. 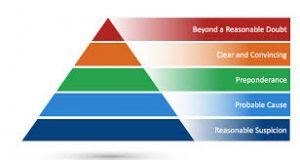 Though not included in the rights discussed above, people have the right to refuse a request for the police to search them or their car (mostly). If police stop someone for speeding and ask to search their car, for example, they can refuse the request. Once they refuse the request, the police will (usually) need to get a warrant for the search. Police may, however, search a person’s car without a warrant under “exigent circumstances,” such as a search incident to arrest.

If police arrest someone on suspicion of DWI, for example, they may search them and parts of their car without a warrant (usually on the premise of “officer safety”). In this case, police may search the driver’s side and, probably, the passenger compartment because it was in the area of their “control”. Police would usually not be able to search the trunk of their car because it is not related to the offense of DWI. If the police arrest someone for a drug crime, however, the search may be larger to determine the amount in the car (to determine simple possession or intent to deliver).

What is not a stop and/or search?

When the officer approaches someone and asks them questions, it is not a “stop” since they are free to leave or refuse to answer the questions. If the officer tells someone that they may not leave, that is when the encounter becomes a stop. There are similar rules about searches. After a stop, an officer asking someone to show license and registration is not a “search”. When an officer makes a lawful request for license and registration, the person MUST comply with that request.

A person must show their driver’s license (including CHL), registration, and proof of insurance. After that, however, they are generally free to refuse to perform any SFSTs or give breath/blood. In essence, a persons always has the right to refuse a test. If they refuse to give breath or blood, police must get a warrant to take their blood. Even though alcohol dissipates from the body quickly, that is not enough of an “exigent circumstance” for a warrant-less search.

How long can the police stop me?

If the police stop someone for a traffic violation, the officer’s actions must be reasonably related to the circumstances justifying the initial stop. The stop may last no longer than necessary to address the traffic violation. The stop ends when tasks related to addressing the violation end (including checking license, registration, insurance, and outstanding warrants). Here is the BIG exception: If the police get reasonable suspicion of other activity, they can extend the stop to confirm or dispel the suspicion. Reasonable suspicion is hard to define, but is basically if the officer “reasonably” believes the person is, was, or will be committing a crime.

For example, police may not request a drug dog to search a car to investigate a simple traffic violation. However, they may request one if, for example, they observe behavior that gives the officer reasonable suspicion of drug-related crime. In any case, the extra time has to be related to the reason for the stop. There is no specific amount of time that is “reasonable”. One innocent example is if the license or warrant check-up system is slow. Since those checks are related to the stop, a slow check that takes 15 minutes is still “reasonable”.

Right to an Attorney

Always, ALWAYS request an attorney be present before answering any questions. Make the request multiple times. Multiple specific requests for a lawyer can be suppressed at trial since repeated requests for an attorney can lead a jury to unfairly infer guilt. The evidentiary language is “the probative value is substantially outweighed by the risk of unfair prejudice”.

A day of being a volunteer Judge via Zoom for the 1st Annual Metroplex Mock Trial Competition (SMU, Texas A& M, UNT - law schools). Great job everyone! Our future is bright with the upcoming legal minds! Proud of you all! 😊 (Sorry for the serious pic! It was serious business!) ... See MoreSee Less

Texas Up- stander. May we all be one! Great panel piece at the Dallas Holocaust & Human Rights Museum. www.dhhrm.org/ ... See MoreSee Less

Children are still being separated from their parents at the border. This is inhumane. This must stop. Humanity must always come first. Politics is worthless if it doesn’t exist for the good of mankind. www.splcenter.org/news/2020/06/18/family-separation-policy-continues-two-years-after-trump-admini... ... See MoreSee Less

Really sad when Texas DPS (who does most blood tests) warns about defective tubes by lot no. yet refuses to release the tube info in your client’s case. Shameful. This is why there should be a separation between law enforcement and forensics. Their hypocrisy won’t work.

Really sad when Texas DPS (who does most blood tests) warns about defective tubes by lot no. yet refuses to release the tube info in your client’s case. Shameful. This is why there should be a separation between law enforcement and forensics. Their hypocrisy won’t work.

The key to a great criminal defense lawyer is smarts and intelligence. It is vital that the lawyer know how to strategize and make wise decisions. A pretty face won’t get you there.