Mimi Coffey is a Texas DWI lawyer who fights! She not only fights in the courtroom, for decades she has been waging a war on the junk science, known as DWI standardized field sobriety tests, used to wrongly convict people. She is recognized nationwide for her efforts. Mimi knows that police use this junk science to justify their DWI arrests, and wants to help you fight back. To find the best way to fight back, Mimi conducts a full case evaluation. During this evaluation, Mimi will get to know you and your story before going over all the evidence with you to discuss the strongest points of your case.

DWI Standardized field sobriety tests (SFSTs) are the “tests” that police officers use when investigating someone for a DWI. These tests were developed by a psychologist under federal grant funding, Dr. Marcelline Burns. She admits that the tests have no correlation with one’s ability to operate a motor vehicle.  The underlying studies have received much criticism due to the lack of adherence to scientific peer review protocols. Dr. Spurgeon Cole conducted landmark research that exposed the deficiencies of these tests for determining alcohol intoxication Unfortunately, police falsely convict a large number of people due to these tests. The three standard tests are:

The SFSTs are not validated on driving ability. Mimi wrote a thoroughly researched paper on the deficiencies of the field sobriety tests.  It was published for lawyers nationwide in The Champion (link for lawyers). The Wisconsin Court of Appeals referenced Mimi’s paper in one of their decisions, holding that SFST evidence is admissible as relevant, but can be attacked for reliability. Other lawyers across the country have referenced this work. It succinctly tears apart the problems with the tests in terms of lack of science. The SFST course for officers (the police DWI manual) focuses on the proper administration of these tests. The issue is that these tests lack the foundation necessary to be used in the manner of which they are being used for arrest decisions and testimony for convictions in court. The responsibility lies with the National Highway Traffic Safety Administration (NHTSA).

Most unfortunately, the science has been sacrificed for the politics of law enforcement. A goal to lessen DWI deaths must not sacrifice truth and science. The marriage of the International Association of Chiefs of Police and NHTSA is dangerous to the integrity of the judicial process. Politics must never trump science. In addition to Dr. Spurgeon Cole’s study, there are others that address the serious deficiencies of a police driven agenda when it comes to science. Dr. Steven Rubenzer has also written critically about its shortcoming.

Mimi’s article is the most comprehensive in addressing the foundational deficiencies of these tests.  Some brief introductory key points regarding the NHTSA studies are:

The biggest issue with this study is that, aside from being the first major study (and thus “setting the bar” for the other studies), researchers conducted the tests in a controlled environment rather than in actual practice. In other words, researchers conducted the tests in a “laboratory”, rather than on roadside after a traffic stop. The study claims that in actual practice officers would decide to release, rather than arrest, if the officer was uncertain, but since this is the first major test, the researchers did not provide a basis for this statement.

Other problems involved subjects arriving already under the influence, which was ignored by the researchers despite the instructions for the experiment, and the sheer number of tests performed, since the three-test battery had not yet been completely “validated” at the time.

This is the study that “validated” and “standardized” the three-test battery of HGN, W&T, and OLS. One problem is that the researchers did not test subjects for other drugs, despite the researchers wanting to limit the study to only alcohol impairment. This casts a shadow over the study because there was no way to determine if other substances affected the observations.

This study is particularly problematic because took only three months to perform and researchers could not monitor all police data collection. In other words, the researchers merely compiled the limited date they received (but did not monitor). Another major problem is that all but one of the agencies analyzed equipped officers with PBTs (portable breathalyzers, basically). The mere presence of PBTs interferes with the researcher’s stated purpose of only using the SFSTs to make arrest decisions. The study even says that some arrest decisions could be based on the PBTs! Furthermore, since this study involved real drivers subject to actual arrest, police already suspected many subjects of DWI before the officer conducted the SFSTs (based on driving behavior, for example). Officers incorrectly classified and falsely arrested at least 16% (~197) of drivers.

This study differs from the earlier studies in that the study included weather conditions and that the study was based on Colorado’s lower .05 limit. Researchers only observed 41% of investigations. But, the observers were all associated with law enforcement in some way. In other words, not only were less than half of the investigations observed, the observed investigations did not have “neutral” observers! Because this study focused on the .05 BAC limit, it did not (and should not) validate any tests used to determine BACs of .08 or above.

This study found HGN to be the most effective test and that the addition of the W&T and OLS did not raise the probability of determining BAC significantly. The study also says that HGN lacks “face validity” because it has no link to driving. In addition, the study admits that officers cannot accurately measure “complex human performance” such as driving skills  at roadside. Finally, the study states that the link between BAC and driving is a separate issue.

An additional issue is that this study involved officers with significant SFST experience, which means that it did not determine whether a fairly new officer would make correct arrest decisions.

The flaw in this study is, out of the 379 subjects, only 256 made it to the final report. Even then, no observation existed for about 38% of the 379 tests performed. The test is also interesting because it shows that failure to arrest impaired drivers included subjects who passed the W&T and OLS but displayed 4 clues on HGN. 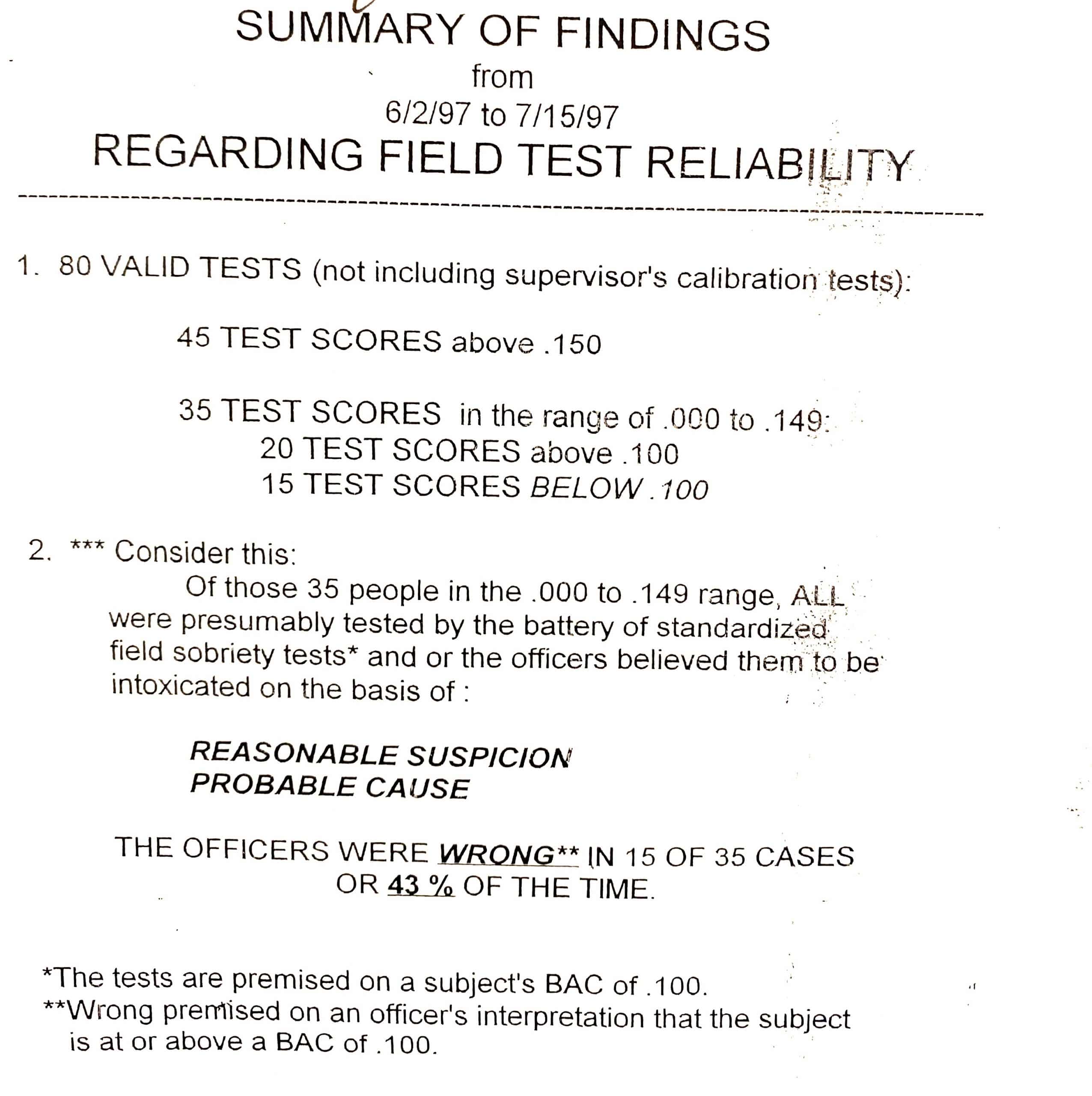 False positives based on Junk Science

Back in 1997, when the legal limit was .10 instead of .08, Dr. James Booker, a Ph.D in Chemistry, calculated how many people failed the Standardized Field Sobriety Tests even when below the legal limit. This study, as seen in the image above, analyzed 80 tests. 45 of the tests showed BAC of .15 or more, and 35 showed between .00 and .149. Of those 35, 20 of the tests showed BAC of above .10, and 15 tests showed below the legal limit. In each of the 35 tests between .00 and .149, officers made arrests based on reasonable suspicion and/or probable cause of alcohol impairment. The offices made incorrect arrests in 15 case, which is 43%! That means that officers can make incorrect arrest decisions almost half of the time based on these standardized field sobriety tests!