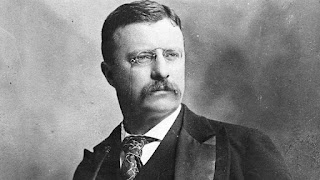 Practicing criminal defense law for 20 years, the one thing that really amazes and disappoints me is when a client loses hope in themselves.  We all make mistakes.  I’ve reminded many a DWI client that President George W. Bush got a DWI and his  Vice President Dick Cheney had two ! No one is perfect. We are all inhuman and no matter how rightfully driven, we all will fall short of the mark at one time or another if we are honest with ourselves. It is the unrealistic and hypocritical juror, judge, prosecutor and other who can easily put themselves on the pedestal while issuing forth judgments that are devoid of compassion, understanding and goodness.  All great leaders rise above their shortcomings while facing them head on resolving to become better and stronger because of them. It is good for all of us to remind eachother of such and do the same !

Just finished reading a biography of Theodore Roosevelt by H.W. Brands. When not working, I find my time best suited by studying the greats (normally I’m studying the Founding Fathers- as it also helps me argue the spirit of the law).  Theodore Roosevelt was arguably one of our best Presidents. He even won a Nobel peace prize for his work in preventing a war between Russia and Japan. What I determined after intently studying his achievements and the manner in which he overcame obstacles, is the fact that you can succinctly describe his life by two words: resolution and resilience.  His goals and aims in life were always lofty: being the first country to send its Navy fleet around the earth (akin to JFK putting a man on the moon), tackling the unsanitary practices of meat packing plants (after he was inspired by Upton Sinclair’s The Jungle) to ensure health for the American people, busting up trusts that perpetuated unfair business practices, bringing together labor unions and owners to stop and prevent shut downs by enforcing his “square deal” policies which  guaranteed opportunity, tacking the Amazon on an adventure which nearly killed him, documenting a world class one year African safari hunt after his Presidency, …  A hero, he achieved all of these and more. He even managed to successfully create a national third political party (The Progressives) for a short time period !

So what was his secret ? His life was not easy. He managed to become  President despite holding two very unpopular jobs that cost him many political enemies (cleaning up the Civil Service Commission and the New York City Police Department where many, including political bosses were on the take).  He always followed his inner moral compass by dealing “square” with everyone and doing his job to the best of his ability. Where many would turn away, he would volunteer. Whether it be his volunteer cavalry, The Rough Riders, he successfully led charging up San Juan Hill in the Spanish American war or tackling the perils of America’s favored pastime of football by creating a conference that defined foul play as penalties to reduce injuries, he jumped at the challenges involved in producing good whether on a large or small scale.  Helping people always appealed to him. He rescued a sausage maker from ruin, whose sausage was banned simply because he named it Bologna (a regulation required it come from Bologna, Italy which it did not). He always employed common sense to his problems and in helping others. In 1906, he pardoned a court martialed navy midshipman whose career was ended over a hazing charge. Theodore could not see how hazing (if it did not result in harm) was injurious when it fostered fraternity and brotherhood.  Yet all this and more from a man who lost elections, lost his mother and wife (right after giving birth to his firstborn) in two days during his first elected legislative session, and was blind in his left eye due to a boxing match while he was President (kept a secret).

When bad things happened, his modus operandi was to take on a challenge- whether it was playing cowboy in the Badlands of the Dakotas, or pushing himself on hunting trips throughout the Midwest. Even after being blinded from his boxing match and despite the advice of his doctor, he kept on boxing. He feared nothing. While christening a submarine prototype, he demanded to ride in it despite being told it was too dangerous for a sitting President. He declared, he would not put any of his military in harm if he wasn’t going to risk it himself. He never let a defeat define him. He rose above them all. At his death he was poised to make yet another comeback as President (as the ideal Republican nominee). He took heartache and disappointment on the chin. He preferred not to talk about it. He always looked ahead, never dwelled on his losses. As a matter of fact, it is said that after the death of his fist wife, he never spoke aloud her name again. 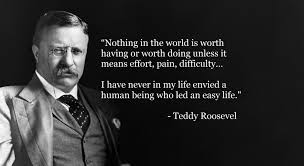 It is good to learn from Theodore Roosevelt. There is no job, no conviction, no life loss that has to define a person. Challenges push us to better ourselves. Without them, we don’t know the mettle that comprises our character. Character rises above defeat of any kind. Theodore Roosevelt possessed a quintessential American attitude of pulling yourself up by your own bootstraps in all situations. Let us all be inspired by his noble example and turn whatever curve balls life throws our way into goodness for others. For it is he who famously said, “Do what you can, with what you have, where you are.”